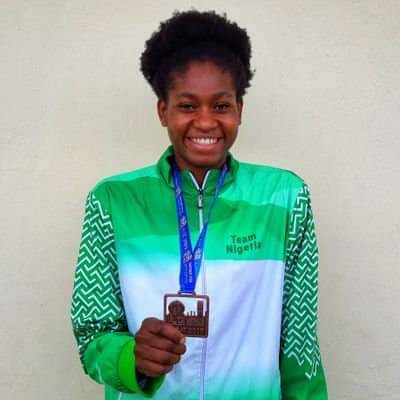 The Enugu State Chairman of the Taekwondo Association, CSP Ebere Amaraizu has praised the untiring spirit of Elizabeth Anyanacho which helped in making the list of Taekwondo Athletes for Team Nigeria in the Upcoming Tokyo 2020 Olympics.

I salute her passion and courage as well as dedication to make it internationally in the game of Taekwondo. Elizabeth is a young lad of about 22 years old with dedication in her studies as a 300 level student of statistics, Federal University of Technology Owerri and also in Taekwondo and now will be among Team Nigeria to Tokyo 2020 in Taekwondo to fight for honour for the country.

Amaraizu who also is the National Coordinator Police Campaign Against Cultism and other vices(POCACOV) stated that the feat attained by the Young Taekwondo Athletes is in line with the self-discovery principles of POCACOV Programmes which goes to show her constant ability to channel her strength and time towards positivism and discovering the potentials in her.

When you indulge yourself with Taekwondo, you will pass through its benefits such as indomitable spirit, modesty, integrity, perseverance which will also prepare you in your endeavors and existence.

By this, Elizabeth Anyanacho will now become the second-ever female to qualify for the Olympics in Taekwondo after princes Dudu at the Athens 2004 Olympics. This is worthy of emulation by our young minds to discover themselves and channeling their strength and energies to something positive thus becoming a champion.